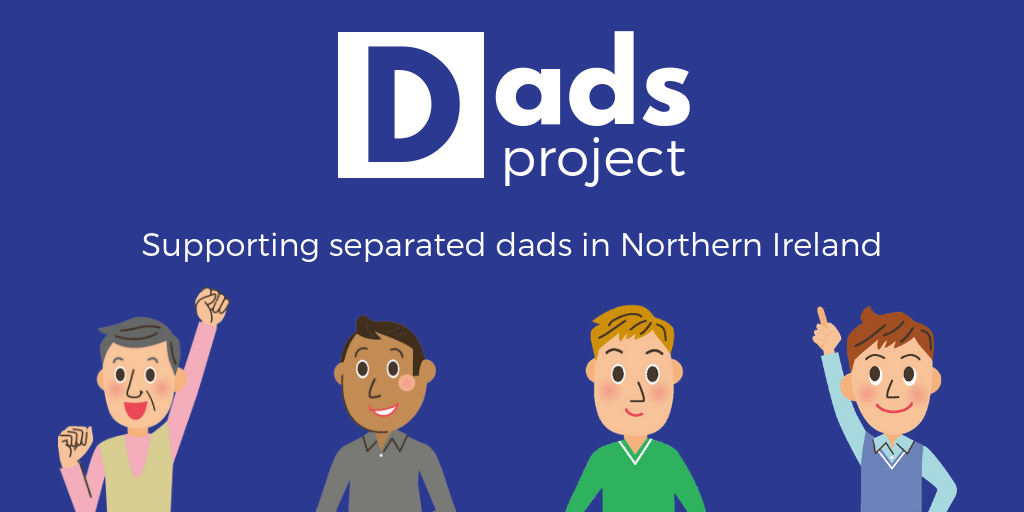 The Dads Walk - let's all celebrate together

A BIG thank you to everyone who came along and got involved in our Dads Walk on Saturday 18th June 2022. 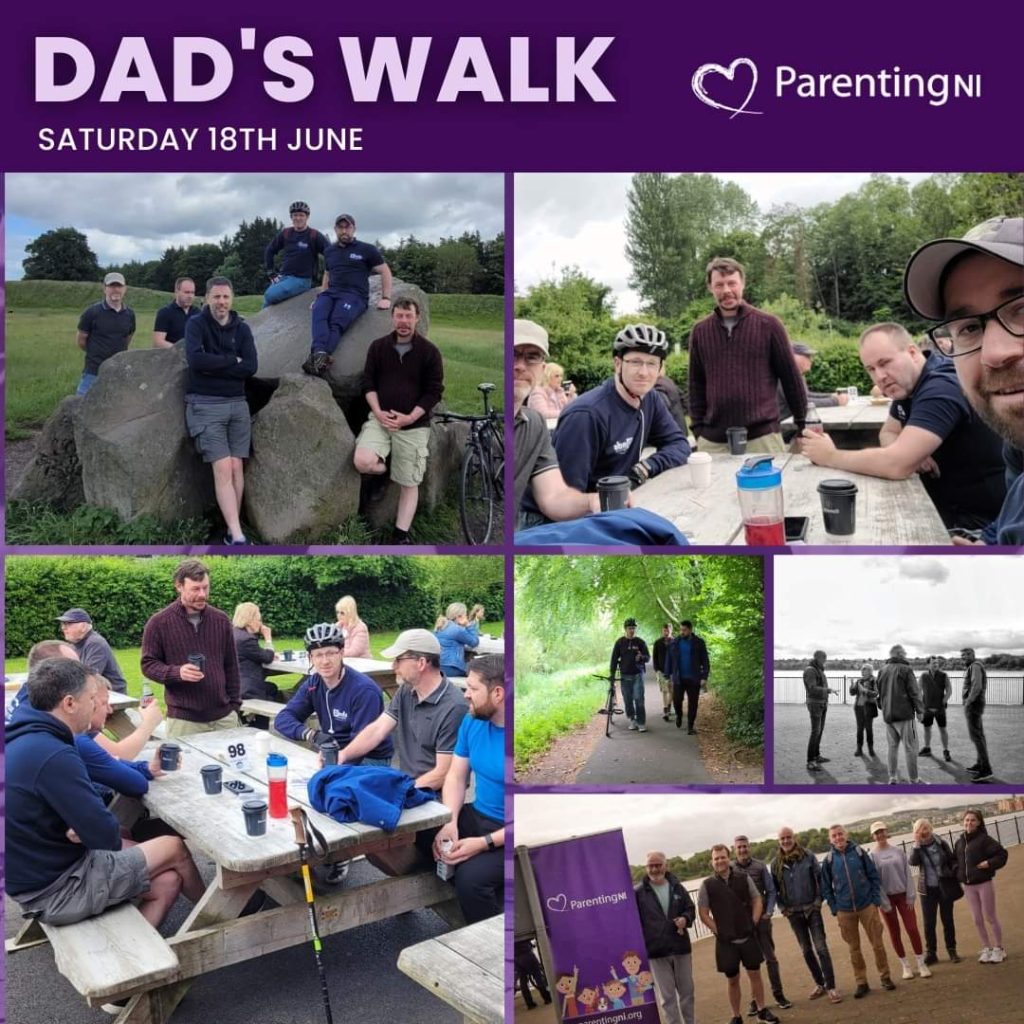 Two walks took place - one along the Lagan Tow Path Belfast and one between the two bridges walk along the River Foyle, Derry/Londonderry.

This was an opportunity to show support for the Dads Project and to help raise awareness of support needed for dads in Northern Ireland. There is still time to make a donation - if you would like to donate to Parenting NI’s Dads Project please follow this link: https://localgiving.org/charity/parentingni/

The Dads Project supports dads in Northern Ireland who are separating, separated or currently involved within the courts service.

The Dads Project promotes dads being engaged and involved in their children's lives. This project will help you to develop more confidence in your parenting ability and to build  positive connections with other dads in a similar position in your community.

An element of the Dads Project is to support single/separated mums through the provision of a ‘Parenting Apart Programme’ so that they too feel better informed as to how best to support their children during and after a separation.

The Dads Project aims to...

Promote children's rights to having access to both parents

Educate professionals about the importance of ongoing engagement with dads

How the Dads Project can support you

The Dads Project aims to help develop your confidence and build positive connections in your community.

At our Dads Talk Group you have the opportunity to share your circumstances with other dads & explore solutions.

Come along to a workshop or programme to increase your skills as a parent and this will help support and improve your relationship with your child.

Duration: 6 weeks
Aim: To support you in minimising the impact of separation on children

Providing practical guidance on how to talk to your children about separation and how you can help them adapt to the changes ahead.

The programme will help you to focus on your child's needs and to explore your changing role and responsibilities as a parent. 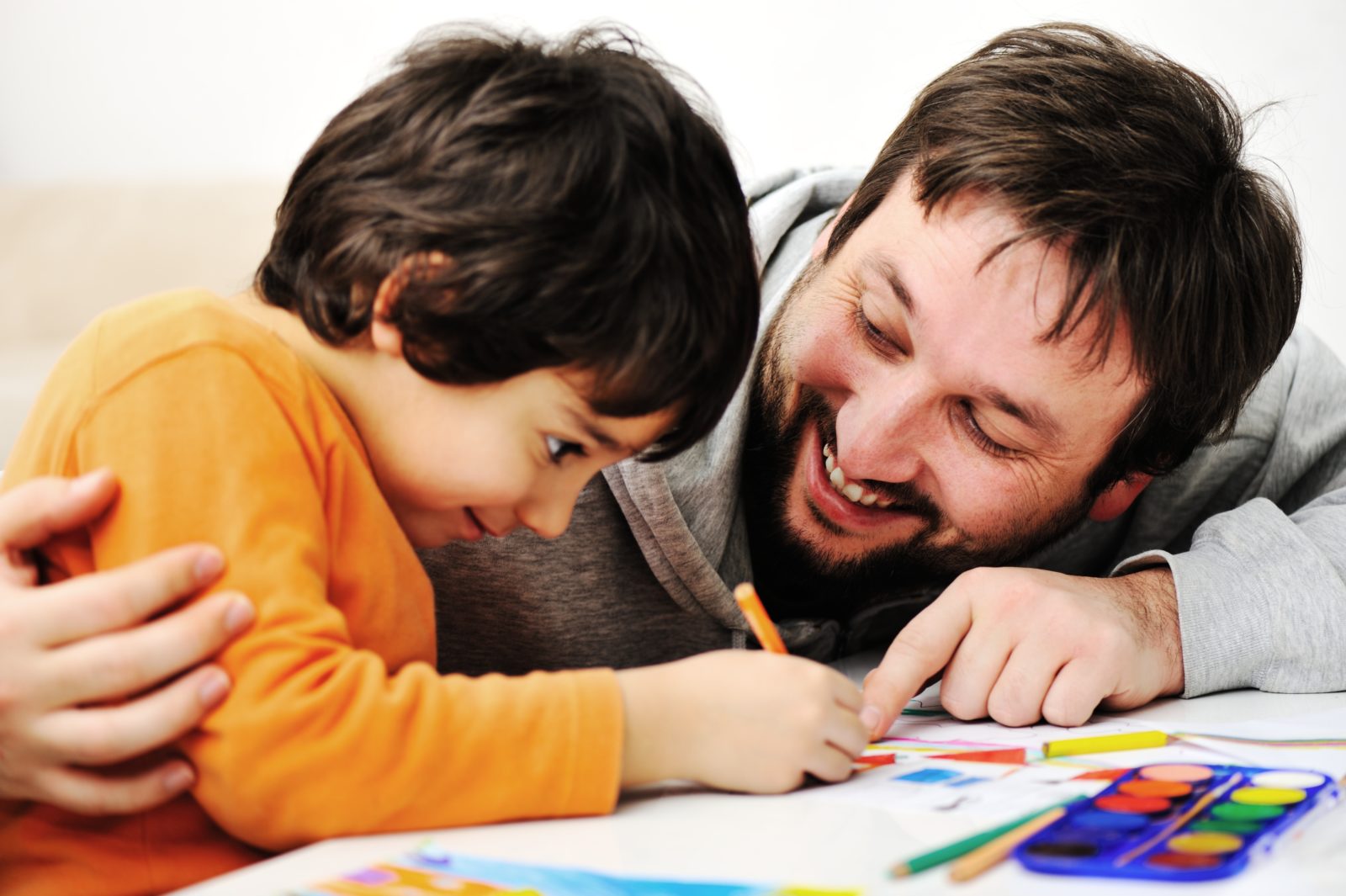 This programme is for anyone in a fathering role. The programme gives you the skills to use a positive parenting approach and emphasises the important role fathers play in their children's lives.

The programme is interactive, fun and an opportunity for fathers to build a support network.

Our quarterly newsletters give you an insight into what the Dads Project has been up to. Click on the images below to download each edition. 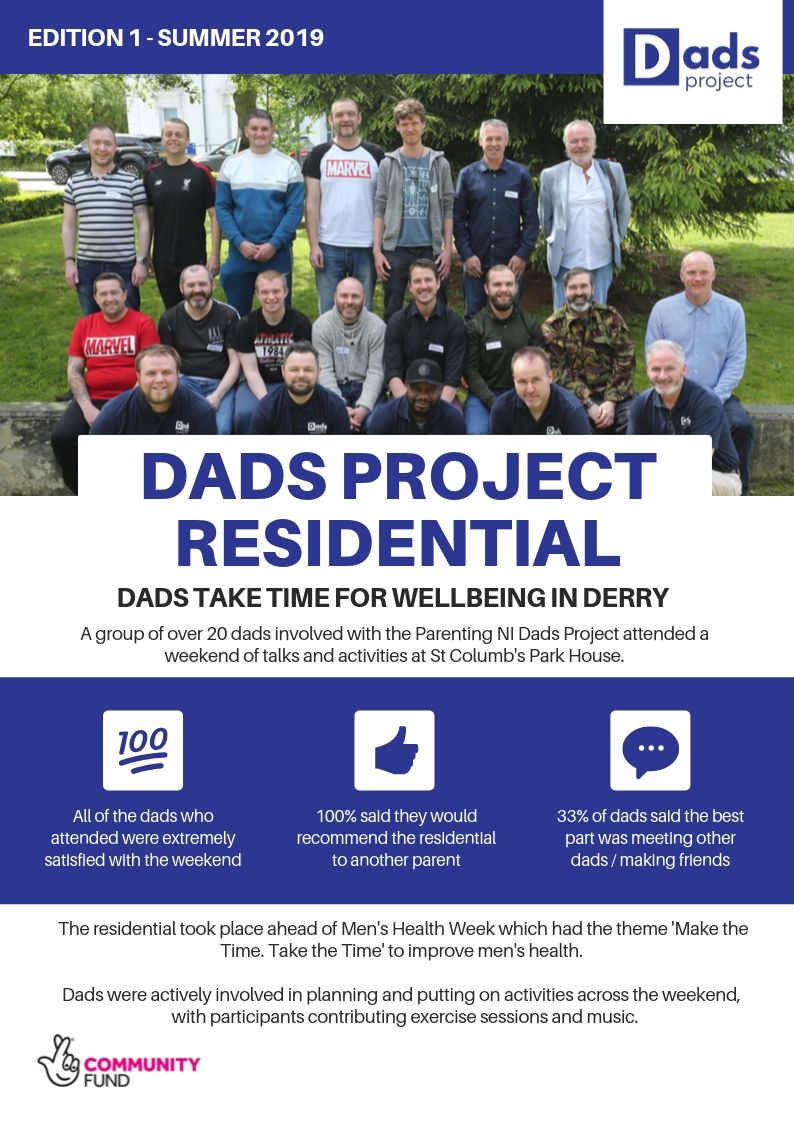 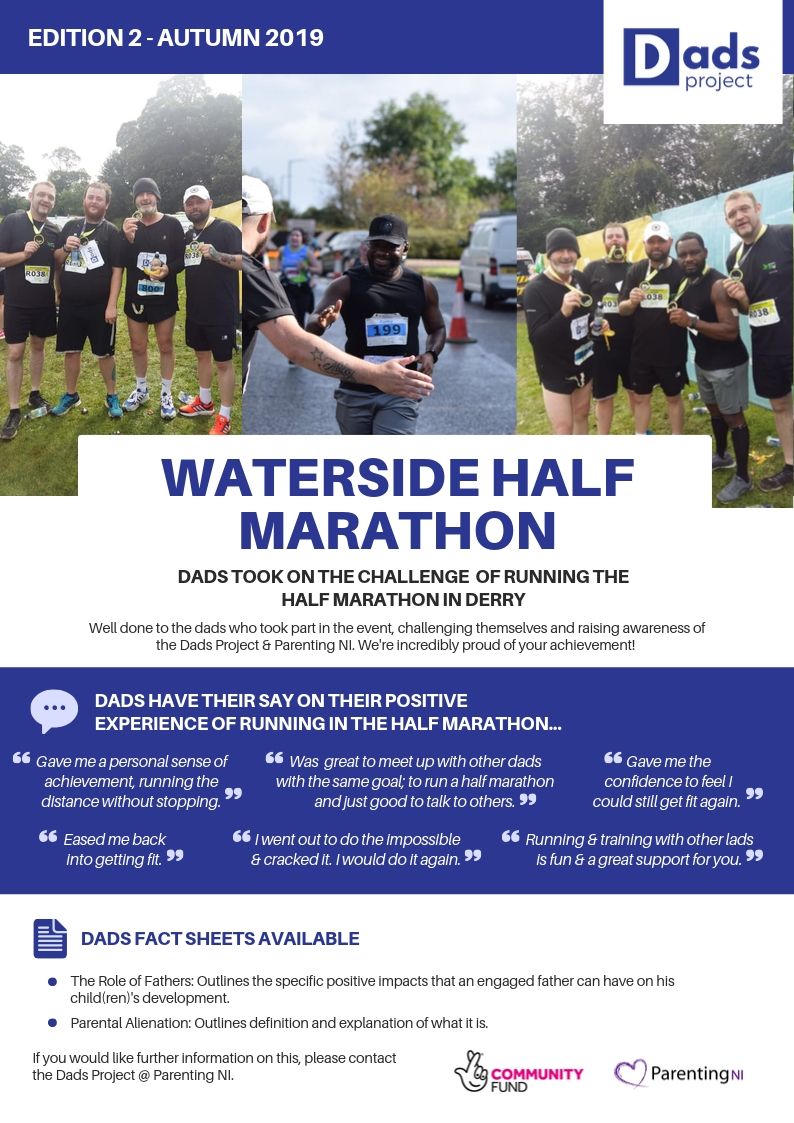 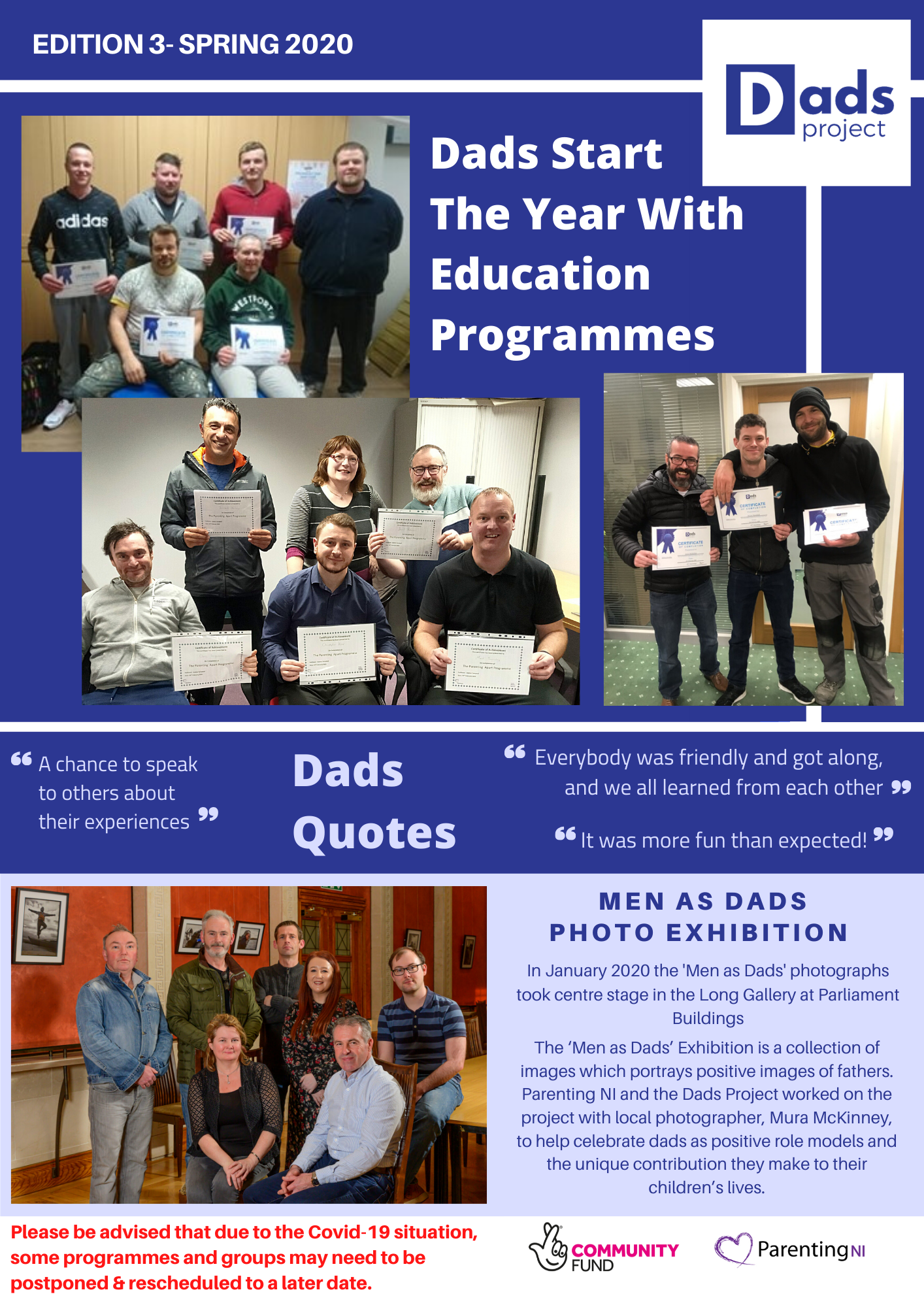 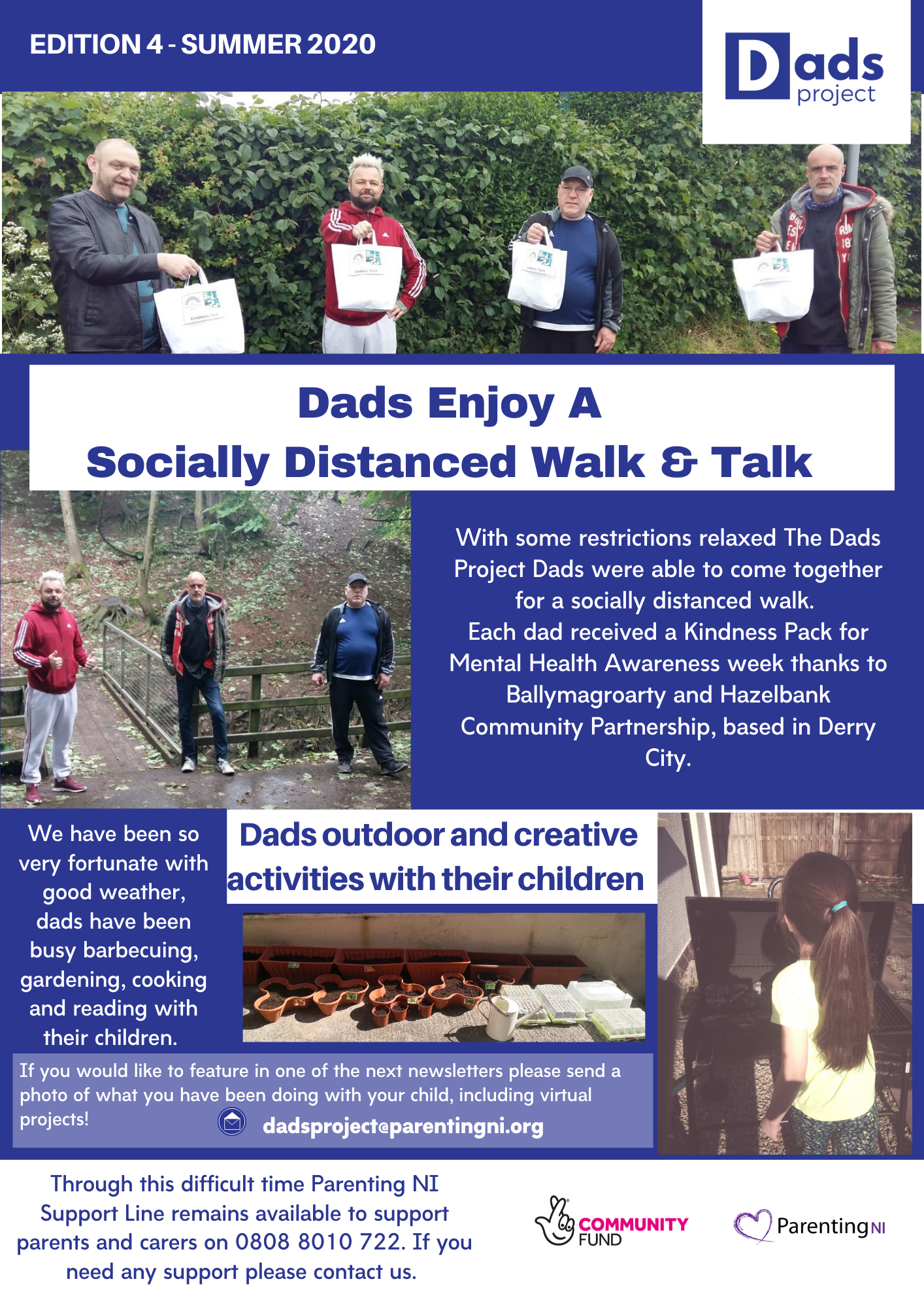 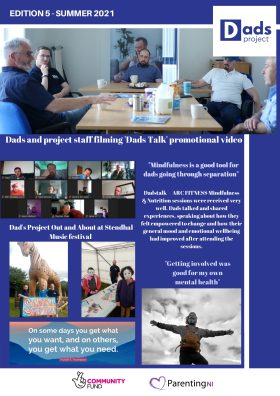 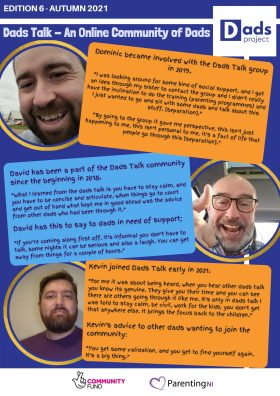 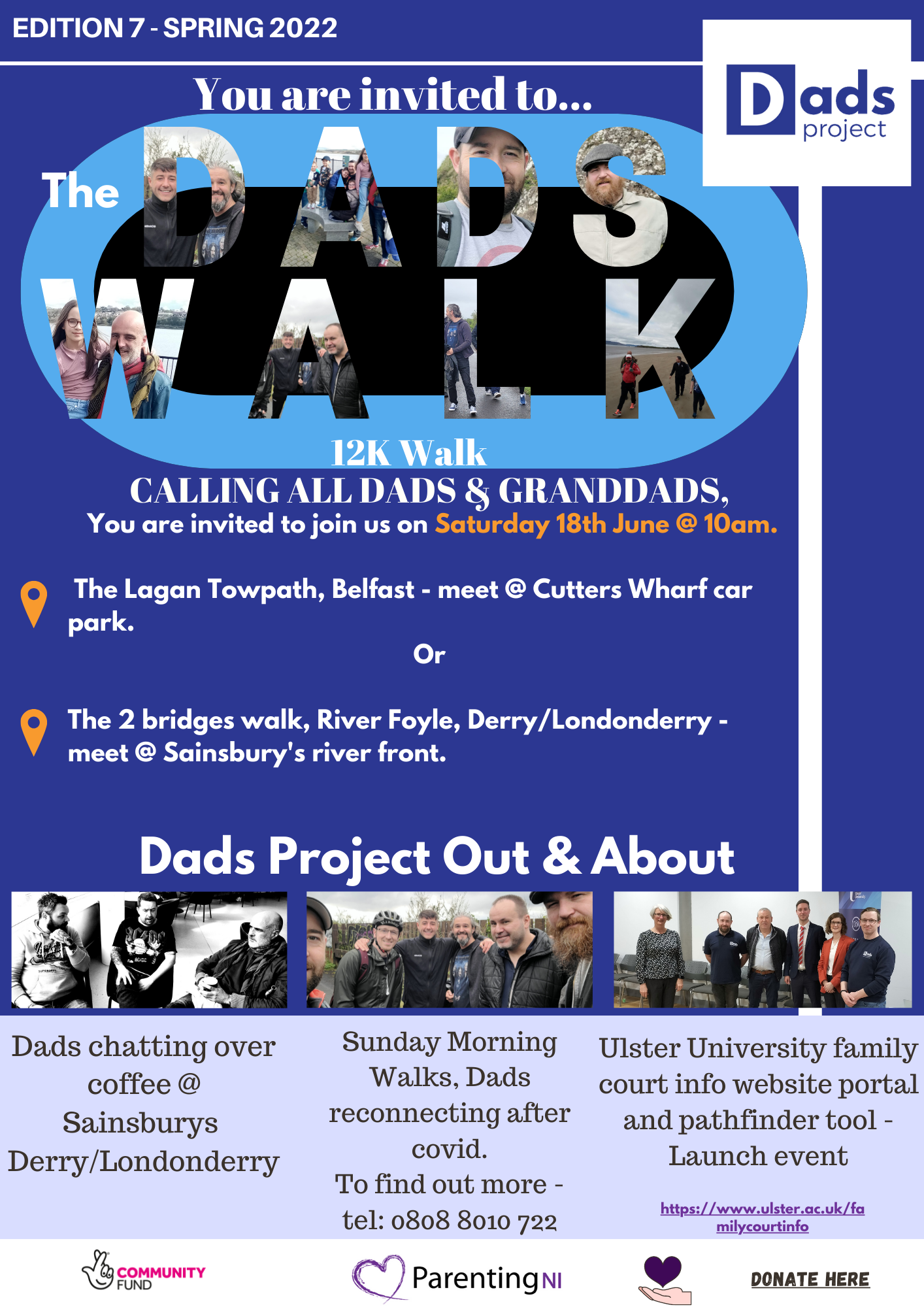 The Dads Project Coordinator, Cahir Murray spoke to Glenn Hinds about a range of things relating to men and dads, including their emotional wellbeing for a piece on his website. You can listen to the conversation on the link below: 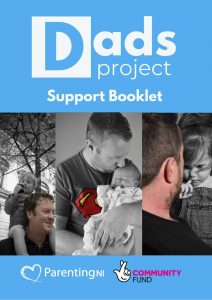 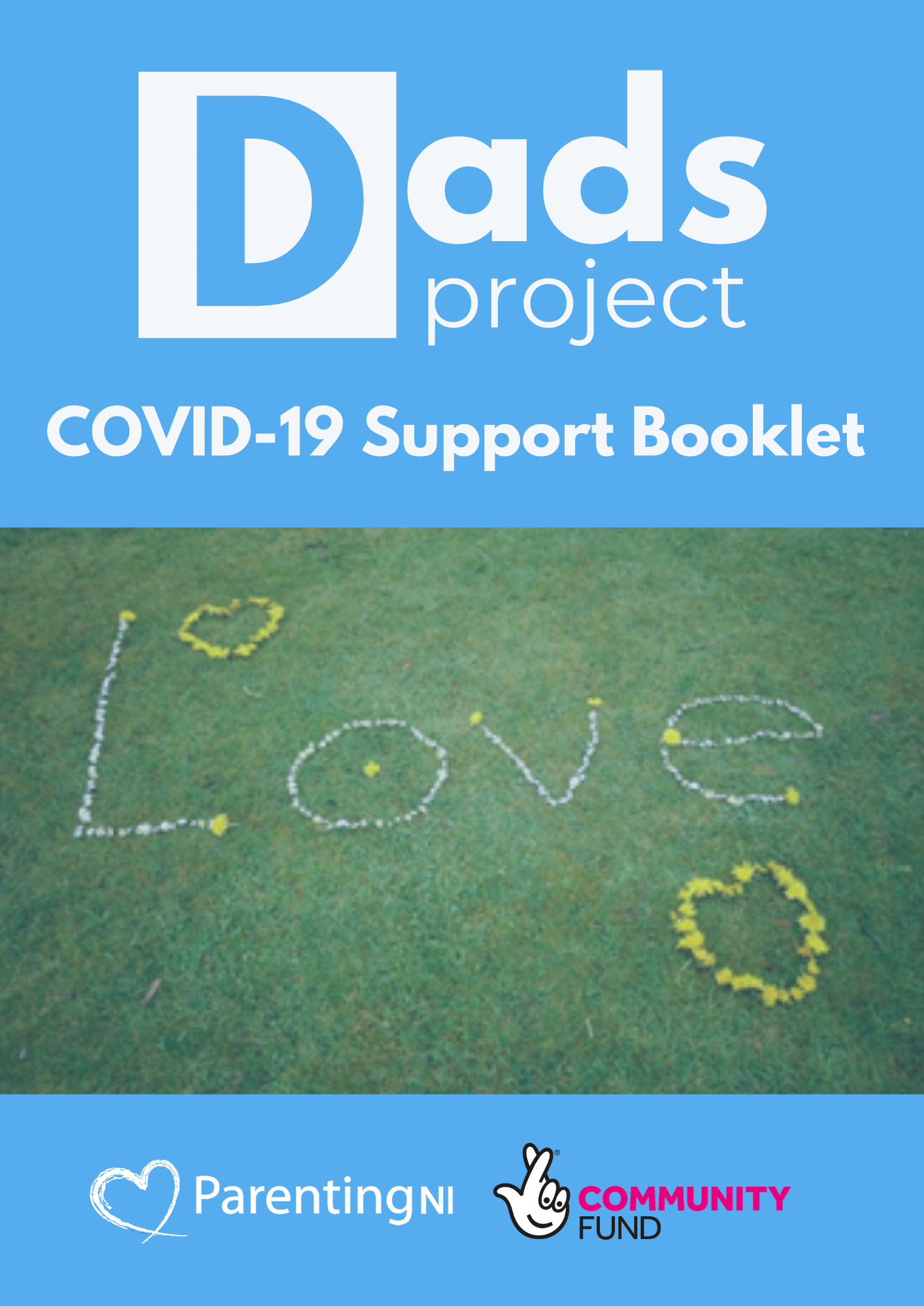 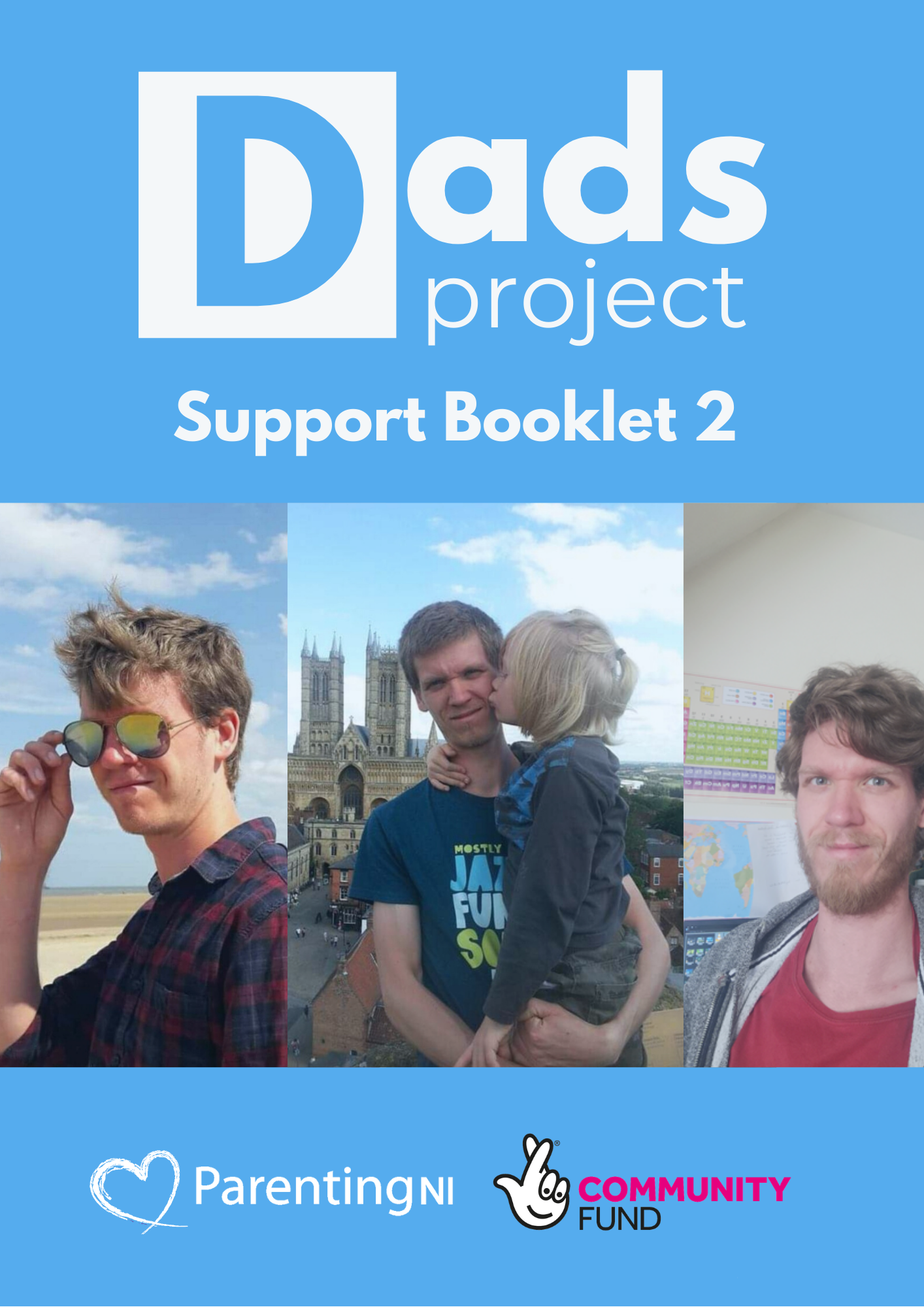 The Dads Project have put together a series of booklets to help support dads at this unprecedented time. They have been put together in collaboration with some of the parents we work with to try and support people the through change and uncertainty. Click the image above to download the first booklet.

Dads Talk is now happening online! The next groups will take place:

If you would like to get involved and take part in the groups please contact the Support Line for free on 0808 8010 722.

Co-Parenting in the time of COVID-19

What is the advice for those who are co-parenting in these unique circumstances? We explore the information & the benefits of children seeing both parents. 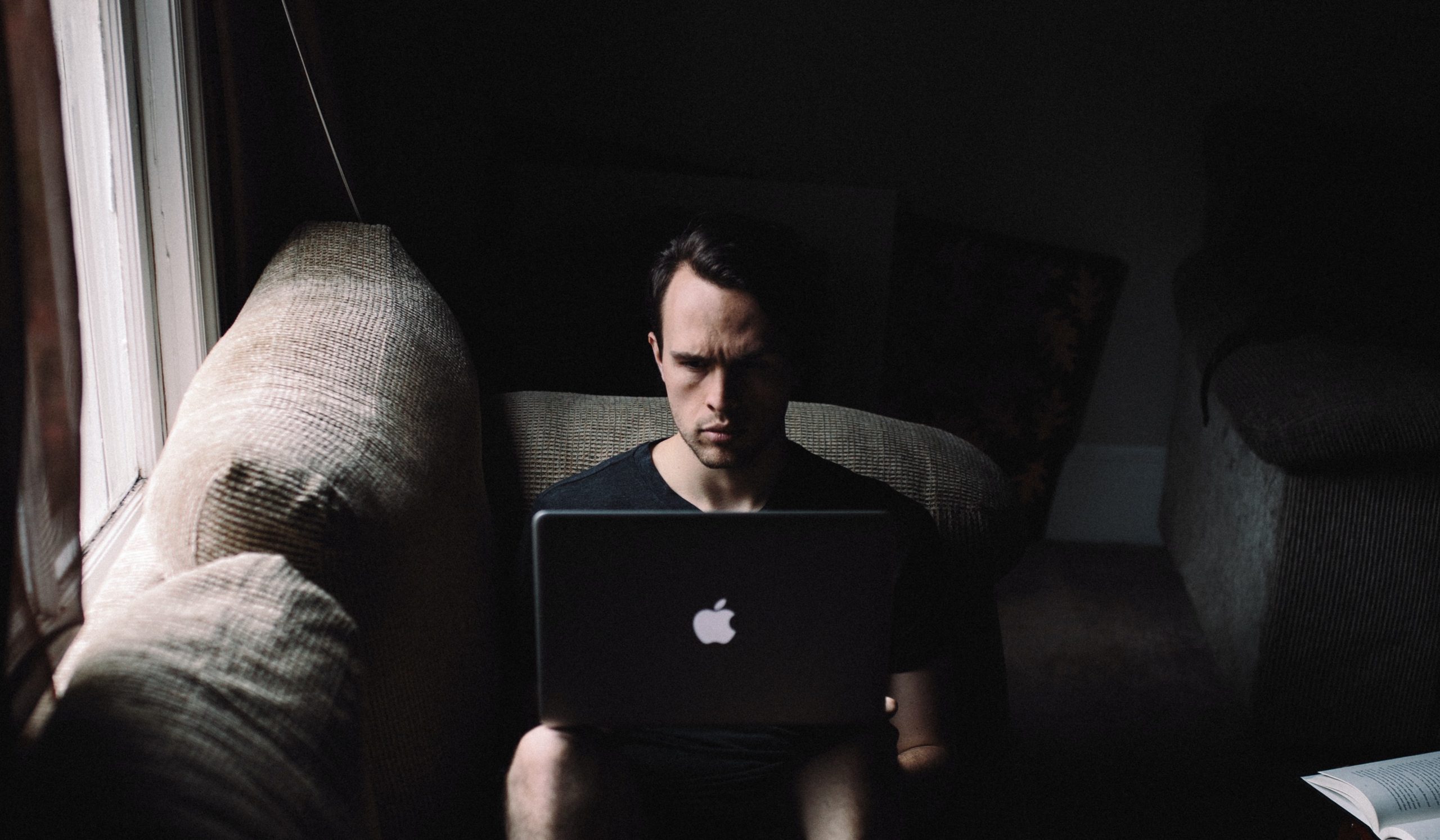 Research paper on dads experiences on lockdown, the difficulties with maintaining contact with their children and the impact of social isolation.

For more support and information we have been sharing during the lockdown period visit our Resources section.

The relationship between children and their fathers is so important. Research is clear in showing that children do better if they a father who is actively engaged in their life. The father child relationship can have a positive impact on educational, physical and mental health outcomes for children.

Dads make a unique contribution to their children's development:

Preschoolers who were most sociable at nursery school were found to have spent more time with their fathers.

In families where fathers are actively involved during the primary school years the children are likely to do well at secondary school.

In families where fathers offer guidance and set boundaries the children are more likely to think of themselves as valuable members of society.

Daughters whose fathers played with them tend to be more popular with their peers and more assertive in their lives.

Research shows when there is a good relationship between a father and daughter there is a stronger likelihood of the daughter choosing a partner who will show her love and respect.

Fathers are as sensitive and responsive to their young children as mothers are.

How fathers spend time with their young children is more important to the father child relationship than how often they are with them.

Children report that contact with dad increases their happiness, their satisfaction in life and reduces distress.

Children whose fathers are involved in their lives are typically physically healthier.

Very young children who have high levels of father involvement are more curious, and have better problem solving skills.

Children of involved fathers are more likely to demonstrate a greater tolerance for stress and frustration.

Children whose father is involved in their lives tend to have better empathy.